Ideacodes is pleased to launch our first release of Twitterverse, a mashup and a visualization layer that mines and archives the public timeline of Twitter and provides a visualization of the most commonly used words in a given time period.  Twitter, the hot new product by Obvious, is a “sophisticated, device-agnostic, social message routing system that nobody realizes they need until they try it,” as Biz Stone so aptly described. Twitter has rightly taken the web and blog communities by storm in the last month.

We launched our first release of Twitterverse tonight after working on the idea for the last couple of weeks and then the last 48 hours straight. 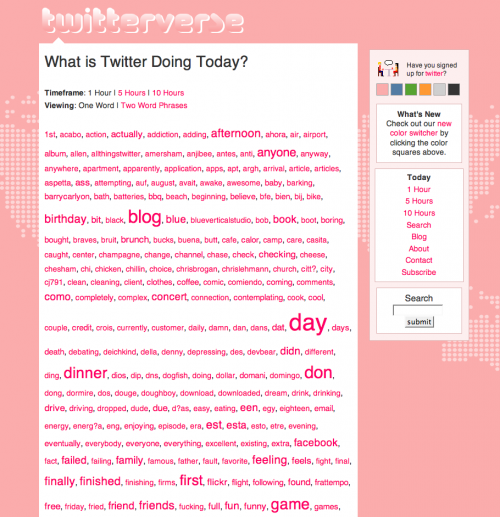 We’re self-proclaimed Twitter addicts. It’s given us a glimpse into the lives of so many and let us share those moments in time, both mundane and magnificent, that otherwise would have gone unnoticed. Where blogging gave us a similar connection to the thoughts of individuals worldwide, Twitter is capturing these little moments in time – much like a photograph momentarily stops and captures time visually. This power to make the invisible, visible, is something that’s always intrigued us regardless of the medium. These moments show us that our thoughts and actions are interwoven and unique, and that our desire to stay within each other’s attention periphery is what makes us human. The 140 character format of Twitter also lends itself to a specific style of prose or poetry that readily displays one’s personality.

As soon as we got on Twitter, our first thought was, “what’s everybody on Twitter doing?” We wanted to see a visualization that showed text/content overlaps and popular words used by people over any timeframe. In the spirit of Hackers and Painters, we threw together a mashup to show this view into the content.

In its current form, Twitterverse displays popular words based on time and popularity. We’re pulling data every minute from the public timeline RSS feed as it updates. The data is parsed by word match, eliminating certain types of words, and a script generates the cloud based on time frame and popularity. We’ll be adjusting the algorithm frequently as we get more data, as well as limiting out certain words (or display names). For now, words are displayed based on being repeated a certain number of times during the specified timeframe.

Even at this basic level, you can start to get a sense of our collective activity and the general zeitgeist of the day. For example, since we cleared our test data and started re-collecting data off the public timeline on Sunday, April 8 at 5:40pm PST, we started to see a shift from people twittering about “easter” early in the day to a growing number of people twittering about “sopranos” as the night progressed. You can imagine checking in daily to see what topics arise.

We have a full list of features that we’ve considered and that we’ll be adding, both in terms of user functionality (eg. login and navigate in your own Twitter theme) as well as other visualizations of data and word types.

You can catch us on Twitter too of course:

We hope you enjoy Twitterverse. Let us know what you think. The name, Twitterverse, is a play on both our focus on the content and verse being created on Twitter, as well as the community and cosmos that makes up the Twitter[uni]verse.

If you’re a developer or a server expert and would like to help out and get involved, please get in touch. We’d like to send out a special thanks to Andrew Weaver and Ver Pangonilo for their great scripts.

Twitterverse is the first project by Ideacodes Labs, a new experimental component of our web consultancy.

Twitterverse in the Blogosphere: a round up of blogs talking about Twitterverse.