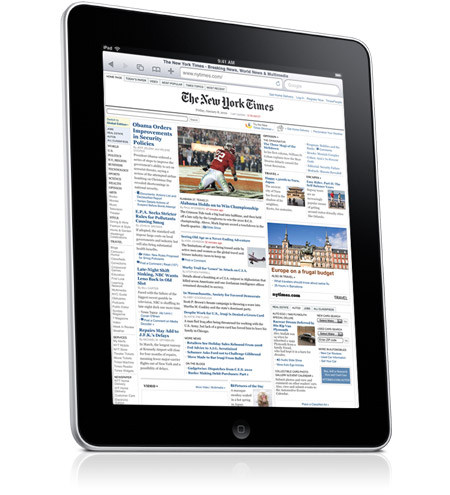 In case you didn’t hear, the much-anticipated Apple iPad was announced today.  Some notable points for me:

Will I buy one? Tricky. In terms of actual use, I don’t have much need for this first version. I already have an iPhone, MacBookPro and a MacPro Tower. I’m also trying to resist buying another first generation Apple product and wait for the second.  But of course, as an interaction designer, I’ll want to test it and explore the interactions for future projects. I’m also excited to see what design applications are adapted for iPad. OmniGroup has said that they’ll be making their products, including OmniGraffle, available as an app. So, we’ll see ;)

UPDATE: Craig Villamor and Luke Wroblewski extracted 8 minutes of video about the new multi-touch interactions on the iPad that were shown of during Apple’s unveiling.

Hey, I did a vlog on the ipad, I’ve been asking musicians how they’ll use it, but also developers… if you wanna comment, I’d love it!

I love the iPad, it’s such a neat product.