Today was the internet’s SOPA strike day. Netizens, websites and tech companies rallied to stop the internet censorship bills, SOPA and PIPA. From the EFF‘s post, Thank You, Internet! And the Fight Continues:

The numbers are pretty amazing.  More than 1 million messages (and counting!) were sent to Congress today via the EFF action center. More than 4.5 million people signed Google’s petition registering their opposition to the bills. And that’s just the beginning. Many lawmakers abandoned the legislation (at least 13 senators today alone!) and we expect to see more defections as a result of today’s protests.

Below are screenshots I took last night of some sites that went black to protest, including Wikipedia, Google, WordPress, BoingBoing.

UPDATE: from the non-profit, Fight for the Future via email:

Google launched a petition. Wikipedia voted to shut itself off. Senators’ websites went down just from the sheer surge of voters trying to write them. NYC and SF geeks had protests that packed city blocks.

You made history today: nothing like this has ever happened before. Tech companies and users teamed up. Tens of millions of people who make the internet what it is joined together to defend their freedoms. The free network defended itself. Whatever you call it, the bottom line is clear: from today forward, it will be much harder to mess up the internet.

Approaching Monday’s crucial Senate vote there are now 35 Senators publicly opposing PIPA. Last week there were 5. And it just takes just 41 solid “no” votes to permanently stall PIPA (and SOPA) in the Senate. What seemed like miles away a few weeks ago is now within reach.

But don’t trust predictions. The forces behind SOPA & PIPA (mostly movie companies) can make small changes to these bills until they know they have the votes to pass. Members of Congress know SOPA & PIPA are unpopular, but they don’t understand why–so they’re easily duped by superficial changes. The Senate returns next week, and the next few days are critical. Here are two things to think about:

1. Plan on calling your Senator every day next week. Pick up the phone each morning and call your Senators’ offices, until they vote “no” on cloture. If your site participated today, consider running a “Call the Senate” link all next week.

2. Tomorrow, drop in at your Senators’ district offices. We don’t have a cool map widget to show you the offices nearest you (we’re too exhausted! any takers?). So do it the old fashioned way: use Google, or the phonebook to find the address, and just walk in, say you oppose PIPA, and urge the Senator to vote “no” on cloture. These drop-in visits make our spectacular online protests more tangible and credible. 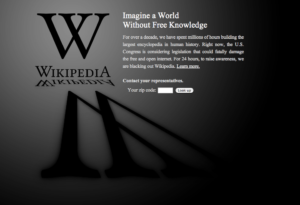 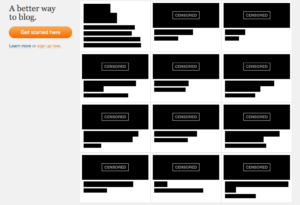 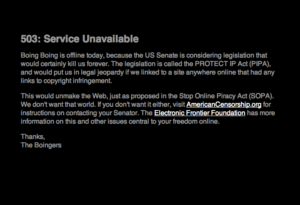