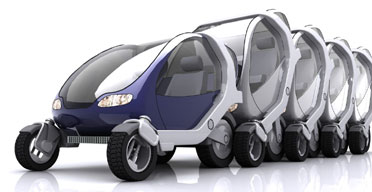 Two recent articles reveal the possible future of cars – powered with intelligent algorithms, semi-autonomous, and made for urban and natural terrain.

From Say Hello to Stanley in Wired:
“Stanford’s souped-up Volkswagen blasted through the Mojave Desert, blew away the competition, and won Darpa’s $2 million Grand Challenge. Buckle up, human – the driverless car of the future is gaining on you.”

From Robot car: streets ahead in cities of the future:
“…the MIT team started from scratch to come up with their own concept: a stackable, shareable, electric, two-passenger car. “Imagine a shopping cart – a vehicle that can stack – you can take the first vehicle out of a stack and off you go,” says Mr Chin. “These stacks would be placed throughout the city. A good place would be outside a subway station or a bus line or an airport, places where there’s a convergence of transportation lines and people.”