A few bits of other news caught my eye this last week amid the flurry of activity here in San Francisco around the Web 2.0 Summit.

Power to the People

» Watch all of the CC videos here.

CC is also running a photo contest on Flickr starting now and going until December 6th. At the FlickrBlog, Stewart Butterfield mentions that there are over 22,000,000 CC photos on Flickr. All of my photos on Flickr are CC.

Creative Commons launched the first CC Swag Photo Contest on Flickr to promote our Annual Fundraising Campaign. The photo must be of CC Swag (t-shirts, buttons, stickers, etc. – all available from the Support the Commons store) and the winners will have their photos used on Creative Commons’ informational postcards, which will be distributed internationally to promote CC and the winning photographers. Winners will receive 100 copies of the postcard with their photo. The winners will also be able to choose a Creative Commons board member to record a personalized outgoing voicemail announcement – that’s right, your friends can be greeted by Lawrence Lessig every time they call you!

» Visit the contest page for details. 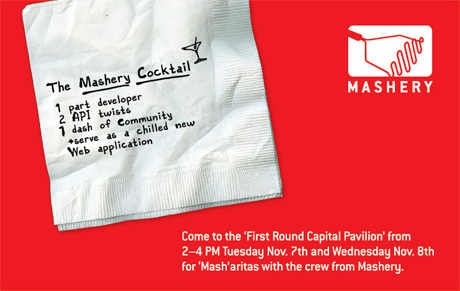 The other bit of news is just a great example of guerilla marketing and the do-it-yourself approach that is vital and indicative of web 2.0. In Dan Fost’s post at the SF Chronicle, Hacking the Web 2.0 Conference, he describes one company’s smart marketing move. Mashery makes software to manage APIs for applications and rather than demo at the Summit or pay to attend, they came up with their own approach that proved just as (more?) effective…

…CEO Oren Michels and investor Josh Kopelman cleverly booked the Palace’s Sonoma conference room as soon as the conference dates were announced. “This is a guerilla launch,” Michels said. “We’re not part of the conference.” Instead, he had a room right at the center of the action, for “a fraction of the cost of a sponsorship.” The room became a de facto party spot…