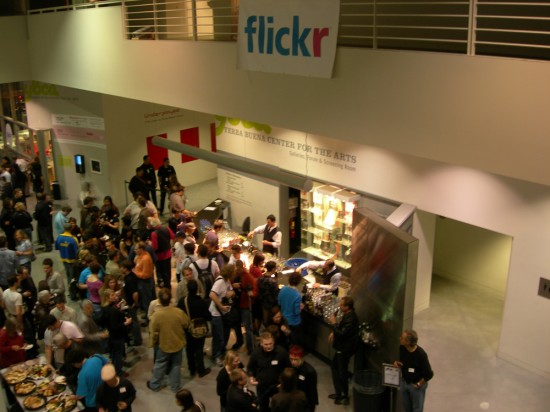 It’s hard to believe Flickr has only been around for a few years. It seems like I’ve been using it much, much longer than three years. That’s testament to its lure, success, and the community that has sprung up around both the service and the lifestyle. Flickr is a seamless part of my digital life. It’s both output of my picture taking and the visual view into the daily lives of my friends, colleagues and contacts.

I like to think of myself as an old skool Flickrhead. Having been a fan of its predecessor, Game Neverending, I signed up for Flickr alpha and posted this photo of a subway in Washington D.C. I got a real kick when Caterina Fake posted a comment back in June 2004. Since then, I’ve had the chance to meet the team and it’s clear that they’re still passionate about their community and product. I’ve also interacted with hundreds (?) of great people through Flickr about photos, design, web, art, travel, and life in general.

The party on March 3, 2007 was held at Yerba Buena Center for the Arts in San Francisco. The open exhibition space was filled with Flickr-buffs accessorized with cameras in hand or hanging proudly around necks. Of course, everyone was taking photos. You can see the tag flickr333 for photos. Here are a few of mine taken with my tiny Nikon Coolpix 7900. (Note: Haven’t color corrected them since I uploaded directly to Flickr and into this slideshow.) You can find me now on Flickr at username emilychang.

Wow… that seems so hard to believe.

It’s inspirational to watch a small idea flourish into a full-blown company in such a short period of time. Even more impressive is the fact that they bootstrapped the whole way – and they’re from Canada, lol ;)

Its nice to know that Flickr has progress. I am a photography hobbyist and Flickr has been my way of sharing my photos. As of late Yahoo has announced that they are going to shutdown Yahoo Photos to make way for Flickr. That would be good for us Flickr users.

Flickr is one of my favorite sites, I have found it useful both professionally (posting my real estate photos and doing quick neighborhood tours as well as a great outlet for my photography hobby.