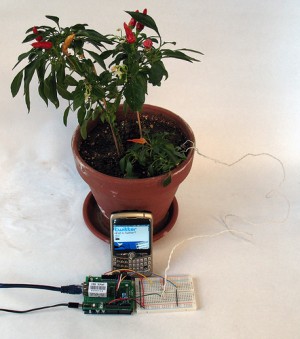 Botanicalls is a project by students at the NYU Interactive Telecommunications Program. It’s “a system that was developed to allow plants to place phone calls for human help. When a plant on the Botanicalls network needs water, it can call a person and ask for exactly what it needs. When people phone the plants, the plants orient callers to their habits and characteristics.” Botanicalls Twitter DIY is a version for Twitter so your plants can send Twitter updates when they need water, or send you their thanks.

According to the site, the system provides five different status updates, based on the plant’s current conditions:

Check the site for detailed steps on what hardware and software you’ll need to build your own. If you’ve set this up, definitely let me know in the comments. I love this! Time for a trip to Radio Shack and Ace Hardware.

Awesome. Think I would be prone to abuse my plants so they would Twitter me more often though.

Hopefully my plants can join some sort of plant focused social network now. Our conversations have been a bit lacking lately. mmmm

Wow, finally we can communicate with the best savior of the earth planet. That is so cool and sci-fi to real. So maybe in future we will start hearing voices of animals, birds, bugs…and may be fishes too.

Great! Every plant has a social life. Is this future of the web?

Cool! My plant will probably have more twitter followers than me

In my opinion there are already a lot of plants on Twitter ;)

That is such an interesting concept.  I am glad some plants I have had in the past weren’t given a voice.  Maybe I would be a better gardener if my plants could yell at me.

Wow, now that’s forward thinking…a real useful and ultra cool application of today’s technologies. I can totally see this being a common thing 20 years from now. It’s exciting to be in today’s world :)

It would be cool if i could twitter a system to give the plants water.

Otherwise they would end up like before, without water.