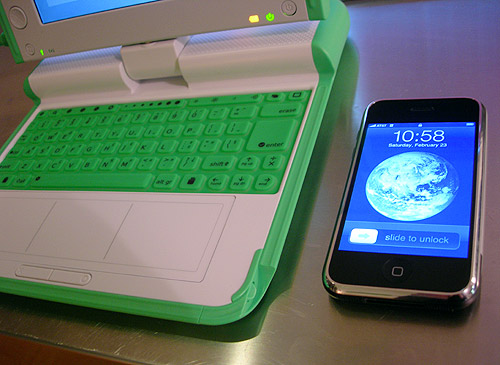 It still strikes me as fascinating that the iPhone and the OLPC (or XO) laptop were both released in the last year, and yet they’re such radically different “computing” and communication devices and concepts. I’ve spent some time playing simultaneously with the iPhone, the XO or OLPC laptop, and my regular computer combo – an Apple slim keyboard and MacPro tower. I thought about the emotional attachments I’ve formed based on user experience. Ignoring the discussion of their obviously different markets and functions for a moment, I wanted to share my experience of using each.

The iPhone has really changed my world in terms of its touch-screen gestural interface. Since it became part of my regular human-computer interactions, I often feel odd shifting back to a keyboard, mouse, and monitor scenario. On the iPhone, as you become accustomed to the gestural interface, speed and intuition are your friends. The faster I type with my index finger without thinking, the better the results. If you stop and think about where the letters are, you inevitably hit the wrong one. Let it flow from your memory of a QWERTY keyboard and you usually hit the right “keys” as if by touch. Preceding the release of the iPhone, there was a healthy amount of skepticism that the button-less screen interface would never work since all typing would have to be visual and not tactile. I definitely wondered if I would miss the tactile quality of physical buttons, but I really haven’t. As I type, there’s a visual connect with the keys as they pop up and magnify. This visual and virtual gestural response has replaced the keyboard in my experience memory. The interface itself works well, although there’s certainly room for improvement. It’s still based on a traditional mobile paradigm: activity by application – phone, email, browser, sms, and so on – and there are times where the various applications introduce exceptions to the system’s interface rules.

From an industrial design perspective, I love the feel of the iPhone in my hand. It’s smooth and glossy, just like the interface experience and visual design of the UI. It slips into my pocket easily and it’s thinness makes it feel precious. I like that the only physical button on the front of the phone is finger-sized and concave to indicate it should be pressed. I do wish the screen surface was more smudge-resistant.

I haven’t spent an equal amount of time playing with the interface of the XO laptop to have the same attachment through frequent use, although I was drawn to the industrial design of the laptop right away. Radically different in design aesthetic, the XO’s small size and large handle, bright green plastic exterior, and the graphical XO on the front are playful and cute, unlike any computer device I know. Of course, the XO is designed for children so the playfulness and miniaturized keyboard are appropriate.

The XO is designed specifically for learning and collaboration. The mesh network capabilities allow you to connect to other computers around you, or for one laptop to connect to the internet and others to get access through the one connected device. Every activity that you’re engaged in has an option to share with someone else.

From an interface perspective, the XO’s operating system, named Sugar, has the opposite appeal than the iPhone. It’s not slick and speedy, but much more simplified in each interaction, relying on point and click like most modern GUI operating systems. Despite that, it engages in equally intimate ways. The language of the interface is much more human than previous computers as is the operating system. In the journal view, the search menus default to search “Anything” and “Anytime”. Instead of a file system browser like most computers, the XO operating system uses a “journal”, which is essentially a stream of all your activities and actions on the laptop. Every application saves files to the journal as you use the computer. I find this time-based and non-hierarchical view into my activity much more compelling than the the traditional file system view. Now that I’ve seen and used this paradigm, I wish it was also part of the Apple OSX.

The interface of the XO is simplified with flat 2D graphical icons, gray tones, and colorful symbols. A “control strip” frames the screen when you hover in the corners. It’s pared down to white outlined icons on a gray background. The cursor is larger and more cartoon-like and the two touchpads respond with a toy-like click. From a hardware perspective, the XO is designed for low-battery use and the screen has a black and white mode for readability in sunlight. I also love that the laptop acts as an eBook reader, in which you can turn the entire screen around and close it to read like a flat display held in your hands.

With the XO, I was able to navigate through various functions after reading the basic instructions. With the iPhone, I didn’t read the instructions past setting up the phone and account through iTunes. Both of them pose usable, intelligent interfaces, but it’s clear that both are still in early stages of development. But there’s a sense of intimacy with each of them that can’t be ignored. Now that they’ve been introduced to my technological repertoire, I already can’t remember what it was like before they existed. I’m curious to see which aspects of each interface influence more mainstream products in the next year. I’m also fascinated to see what the kids that are now using the XO will think of other computers, or what their view of interfaces and devices will be as they get older. My first Apple certainly influenced me. What will the XO do for them?

ps – If you’re in the Bay area, there’s a meetup for OLPC / XO owners tonight in SF.

Hi, I found your blog randomly (don’t exactly recall how) but I’ve been reading some of your articles and I have to say that this is some of the best online reading available.  Great depth, solid knowledge, and interesting thoughts.  Keep it up :-)

Definitely agree regarding the iphone… it’s totally changed my life. Having access to my emails from wherever I am is the best thing ever as a freelancer, means i don’t have to sit in front of my computer waiting for clients… it’s done wonders for my tan too ;)

yes, the touch screen will change everything, not to mention 150 dpi displays.