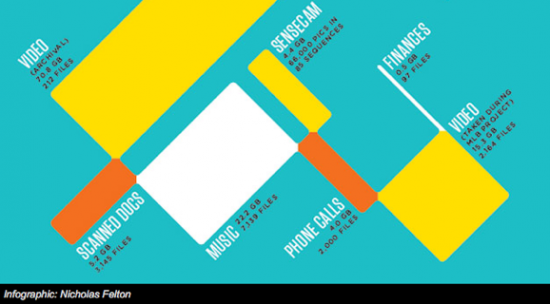 I have a healthy obsession with self-documentary, data-streaming and collecting, so you can imagine my delight when Mark Krynsky twittered that he had just posted about 75-year-old Gordon Bell, lifestream pioneer, who was covered in the Wired article, Microsoft Researcher Records His Life in Data.

Over the course of a lifetime, humans take in more information and memories than their brains can handle. Microsoft researcher Gordon Bell believes this to be a bug, not a feature. And as he chronicles in his new book, Total Recall, he’s working on an upgrade. Since 2001, Bell has been compulsively scanning, capturing, and logging each and every bit of personal data he generates in his daily life.

Called MyLifeBits, the project is feasible only because of the shrinking cost of storage, but creating the archive is just half the battle. “The problem isn’t putting it all in. The problem is getting it out,” says Bell, who works at Microsoft’s Silicon Valley Research Group. “When I started, I couldn’t find anything!” A classic file-and-folder hierarchy forces you to shoehorn multifaceted data into specific, rigid categories. Bell’s solution is to make everything miscellaneous. He switched to a database that lets info exist in multiple categories and began full-text indexing, which increased his metadata—and, therefore, potential search terms—by orders of magnitude.

While I’ve been collecting my social network behavior through my data stream for a couple of years now, and have attempted to record my design processes and pondered why My OS Doesn’t Work Like My Mind, I’m nowhere near documenting the comprehensive e-memory that Gordon Bell has collected. I’m particularly enamored with the SenseCam. I remember when Justin Kan certainly gave the real-time lifestream a go in 2007 by broadcasting his waking life for several months, but the SenseCam takes a more automated, edited and subtle approach to collecting images at random moments. When pieced together, those snapshots create a story/memory.

From the Total Recall site:

What if you could remember everything? Soon, if you choose, you will be able to conveniently and affordably record your whole life in minute detail. In Total Recall, Gordon Bell and Jim Gemmel draw on their experience from the MyLifeBits project at Microsoft Research to explain the benefits to come from an earth-shaking and inevitable increase in electronic memories.

Total Recall is available on September 17, 2009 and you can pre-order now!  I’m excited to read it. Keep up with Gordon Bell’s thoughts on the Total Recall Blog.