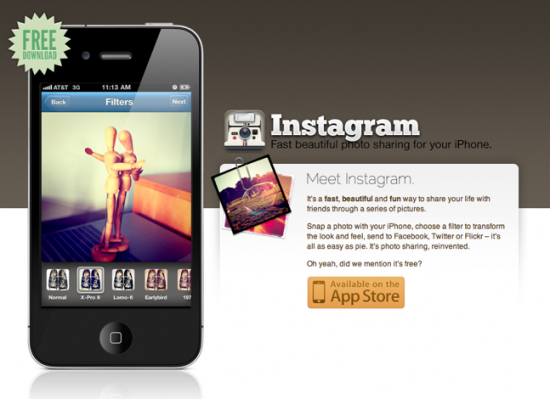 I didn’t think I needed another iPhone photo app, but turns out I did. Instagr.am mimics other mobile photo-sharing apps, but it’s captured the appeal that comes from extreme minimalism. While you can use it to cross-post to other sites (Twitter, Flickr, Facebook, Tumblr, Foursquare), the web-side is pared down to just the photo page. There isn’t a link to a user profile, no view to more photos by the user, etc. The world of Instagram happens on the iPhone and because of it, it’s a little, pocket-size world of streaming images from those you follow. I’m seeing friends that rarely post photos to Flickr or Facebook suddenly posting 30 photos a day on Instagram. It’s addictive for both production and consumption.

As someone who tends to consolidate all online activity on their own domain, how do you get pictures out of Instagram onto your site? Do you publish them seperately or are you planning to import them from one of the supported networks?

So interesting to compare this and Path – seems like there’s a subtle move toward even simpler, no-frills social networks powered by mobile.

Emily Chang
– In reply to: Bill

Bill, right now I’m manually posting certain Instagram photos here to my site, but may hook up something more automatic like importing off the feed.