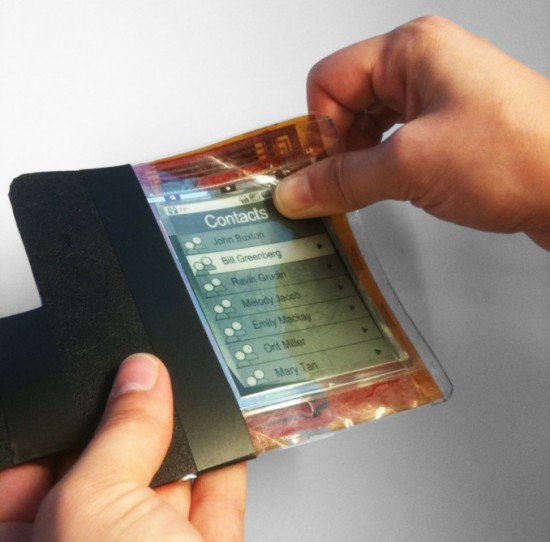 Exciting. Can’t wait until this is consumer-ready.

Researchers from the Human Media Lab at Canada’s Queen’s University have created a fully-functioning floppy E-Ink smartphone, which they also refer to as a paper computer. Like its thicker, rigid-bodied counterparts, the Paperphone can do things like making and receiving calls, storing e-books, and playing music. Unlike them, however, it conforms to the shape of its user’s pocket or purse, and can even be operated through bending actions.

“This computer looks, feels and operates like a small sheet of interactive paper,” said its creator, Roel Vertegaal, who is also the director of the Human Media Lab. “You interact with it by bending it into a cell phone, flipping the corner to turn pages, or writing on it with a pen.”

The device has a 9.5-cm (3.74-inch) thin film flexible E-Ink display, underneath which is a flexible printed circuit incorporating resistive bend sensors. Those sensors allow it to be programmed to recognize different types of bending gestures, which will subsequently result in it doing things such as navigating menus, making calls, selecting songs, or any other function. A built-in Wacom tablet also allows users to draw on its screen – making it even more paper-like.

When not actually being operated, the Paperphone consumes no electricity. Vertegaal’s team have also created a similar device, the Snaplet, which can be worn like a wristband. It operates as a watch when in a convex state, becomes a PDA when flat, and can be used as a phone when turned concave.

The technology is the result of a collaboration between Queen’s University and Arizona State University, and will be officially presented on May 10th at the CHI 2011 conference in Vancouver.

“This is the future,” said Vertegaal. “Everything is going to look and feel like this within five years.”