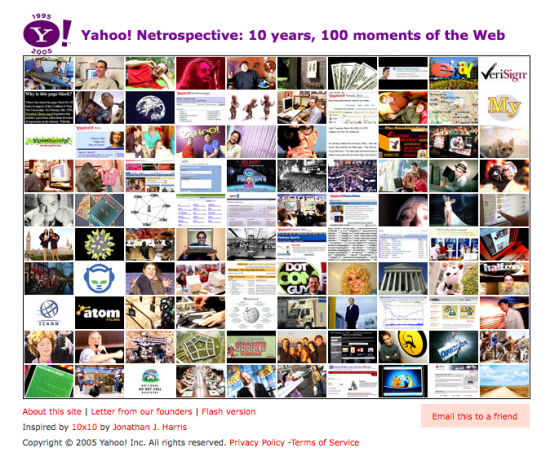 It’s hard to believe it’s already been 10 years for the commercial web!  All you kids out there (that’s all of you 13 year olds that are signing up for livejournal at lightening speed) that think the internet has always been around, get this – when you were three, the commercial web was only just beginning.

I was in graduate school in New York when I made my first web page in my sanctioned web space on the school’s server:

That was back when the tilde ‘~’ was considered a cool addition to your URL instead of the way it is now, with total SEO madness, everything-is-dashed.com.  I have fond memories of my 28.8k modem, the great dial-up “beep beep beep” of FreePPP connecting to the internet.  The connection was spotty and sometimes we had to entice it to connect by giving the internet monkey a banana (it’s a long story… but remember webmonkey.com?).  Hey, where did the internet go?  Back then, I thought of it as “the internet,” almost as though it was a physical thing.  As I’ve been immersed in it for the last ten years as both a maker of web (designing, creating, consulting, coding, and producing sites) and a total web consumer (of information, services, community, commerce, communication, research, creativity, etc), I’m still driven by the power of the internet and the potential – for good.  We need to look beyond the web as yet another business model and work towards that utopian dream of greater integration, easier communication, and more efficiency and control for the “user” or individual.

On a very personal level, the web has been the greatest influence on me in the last 10 years and it’s only apropos that I’m now physically close to the same places or people that have influenced me online for many years (and some of them I can see from my 11th floor view) – Wired, Organic, Frog, Adaptive Path, Six Apart, Apple, Alternet, Goto Media, Google, Browsercam, CNET, Lessig, Flickr, and so many others.

Here’s to the two guys who started a little search engine in their trailer at Stanford 10 years ago and got me reminiscing: Yahoo! Netrospective: 10 years, 100 moments of the Web.