Vox, Six Apart’s new blog service, launched on Oct 26. Vox puts the emphasis on personal blogging and sharing with friends and family. It features advanced privacy controls, a stunning variety of unique themes, powerful integration with other services like Flickr, YouTube, and more.

“Blogging is fun again. With powerful privacy controls that give you control over who views your words, photos, videos, and audio, you’ll never have to worry about who’s reading your blog. And with Vox’s hundreds of beautiful designs that can be enabled with just a few clicks, you can spend less time working on your site and more time keeping up with the people you care about…”

Max and I are pleased to have designed the Bunnylicious and Zen blog themes for Vox. We also loved working with the Six Apart design team on the initial task flow wireframes and UI for Vox (then Comet) during the summer of 2005. 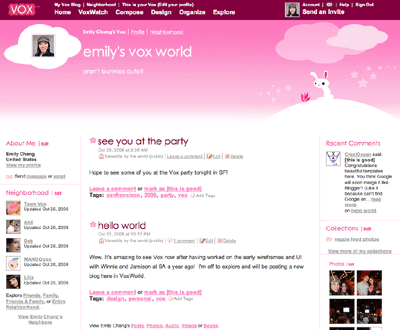 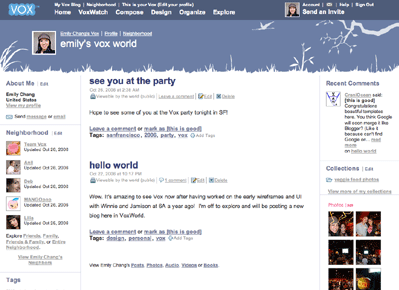 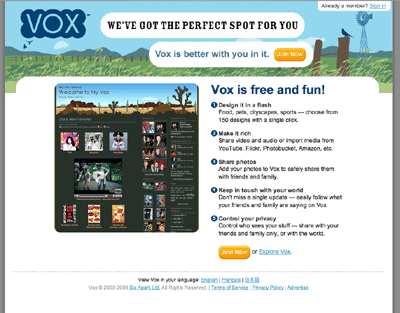 I’ve been a fan of Movable Type since it’s first release in 2001 so it’s been particularly gratifying to watch Six Apart grow from Mena and Ben’s idea to a global blogging company with multiple services just five years later.

The launch party on Thursday night was at Bimbo’s in North Beach and the crowd was a mix of people from Six Apart, techies, bloggers, friends, press, and many of the SF/bay area digerati. I’ve only been a part of this scene for a year now, but before I moved out here to pursue my own web dream, I followed the work of and was inspired by many of these same people for several years. As I stood there for a moment, I couldn’t help but think of the words of computer scientist Alan Kay – “the best way to predict the future is to invent it.”

See also:
Get your own free Vox account
My Vox world
My flickr set of the party
Chris Messina’s review of Vox