Yesterday’s inauguration of President Barack Obama was significant in so many ways. For web geeks like me, it’s the first time citizen media played such a significant role during an inauguration. Given Obama’s grassroots campaign and his message of citizen responsibility, this is only apropos. Numerous netizens, web sites, blogs, video sites and social networks provided coverage and conversation (eg. Twitter, Flickr, Ustream, Current.tv, and others). It was also the first time during an inauguration that citizen media was so promoted and integrated into mainstream media.

I woke up at 8 a.m. PST to the sound of crickets (my iPhone alarm) and tapped on the Ustream iPhone app (iTunes link), which had just become available in the iTunes store the day before. Seconds later, while still in bed, I was seeing live AP and CNN video of the inauguration events on my iPhone. That’s a first.

When I got to my desk, I opened up some tabs in Firefox and launched Twitter to see what my friends were saying. I also opened Twitter search and Tweetdeck with the terms “inaug09” and “inauguration” specified to see public opinions. For video, I went to Current.tv‘s stream and the CNN video player, which included a Facebook panel integrated into the right side of the page. Right away, I was seeing commentary from my Facebook friends, automatically refreshed. This was particular intriguing since I have friends in Facebook that span from high school to college to grad school, NY to SF, to eHub and Ideacodes contacts and tech clients. It was fascinating to see such a wide array of opinions and conversations around this one event from people I knew in such diverse contexts.

Photo of my iPhone with Ustream and my monitor: 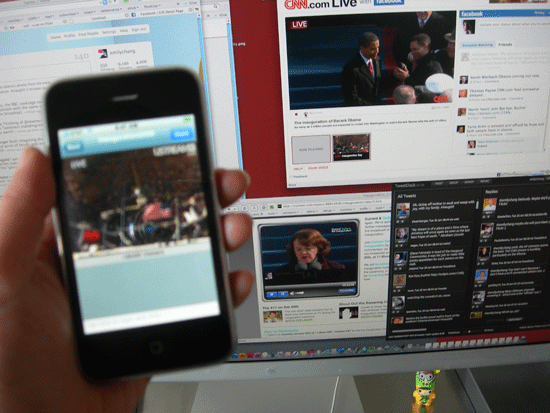 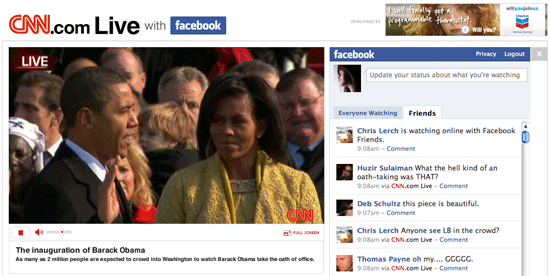 A few minutes after President Obama’s speech ended, I searched to find the text transcript. I ran the text through Wordle and create these two tag clouds, which I posted to Flickr and twittered about. 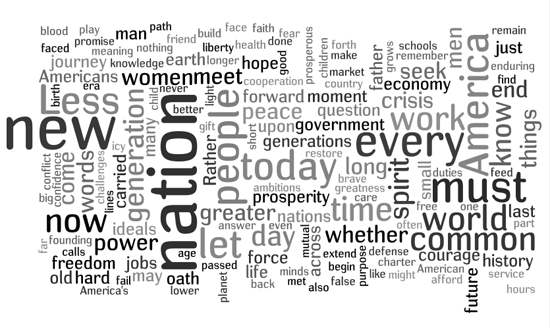 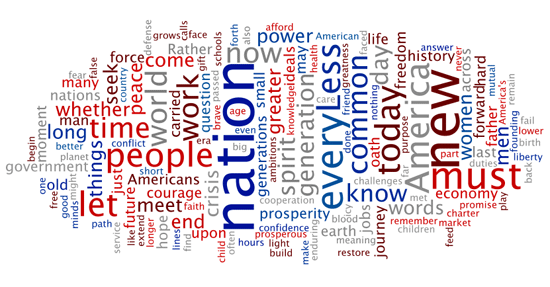 On Flickr, the tag cloud screenshot generated more than 5,000 views, lots of favorites and comments within a couple of hours. I also added my shot to the Flickr Inaguration09 group.

Edubya, one of my friends on Twitter and Flickr, suggested that I “zazzle up that tag cloud.” Sure enough, later that night, I made a little Zazzle store with some merchandise designed with the tag cloud of Obama’s speech. I tweeted again and within minutes, Edubya bought 4 mugs :)

You can also see a great comparison at the NY Times of tag clouds from every U.S. Presidential Inauguration speech from 1789 until present.

Turns out my tweet became the second most retweeted during the hour of the inauguration. Very cool! Unsurprisingly, I learned that from @retweetradar who sent me a tweet letting me know. 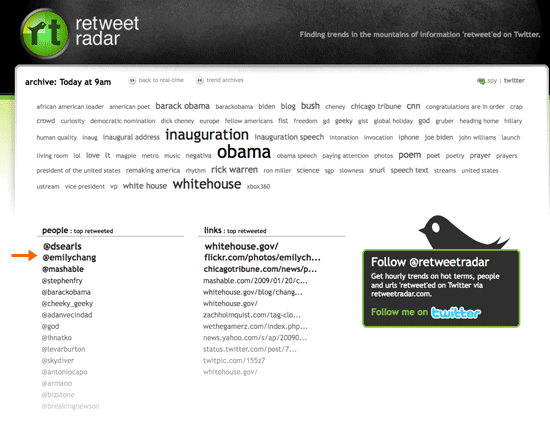 Certainly, we’ve witnessed the explosion of citizen and social media in the last few years, and it’s only apt that Obama’s inauguration proved an appropriate time to converge and celebrate it. To me, Obama is the first President in my lifetime to promote and discuss this need for interaction, conversation and participation. Now let’s get to work again, using our tools and technologies to solve real-world problems.

Sreenshot of the new Whitehouse.gov: 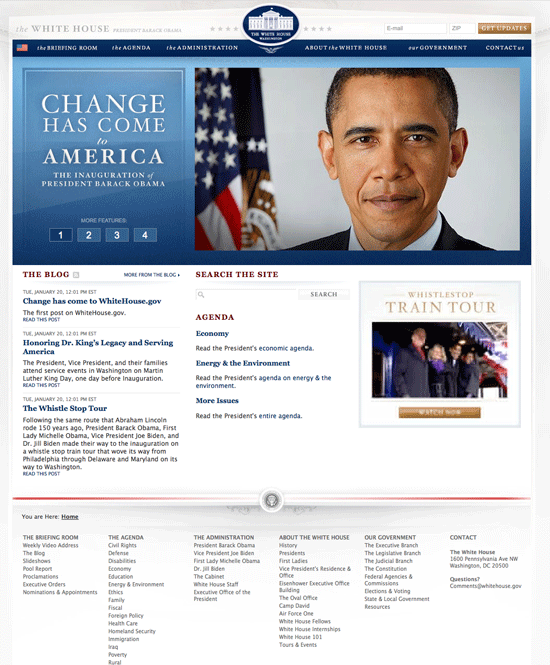 To close, here’s the first blog post on The White House Blog:

Change has come to WhiteHouse.gov

Welcome to the new WhiteHouse.gov. I’m Macon Phillips, the Director of New Media for the White House and one of the people who will be contributing to the blog.

A short time ago, Barack Obama was sworn in as the 44th president of the United States and his new administration officially came to life. One of the first changes is the White House’s new website, which will serve as a place for the President and his administration to connect with the rest of the nation and the world.

Millions of Americans have powered President Obama’s journey to the White House, many taking advantage of the internet to play a role in shaping our country’s future. WhiteHouse.gov is just the beginning of the new administration’s efforts to expand and deepen this online engagement.

Just like your new government, WhiteHouse.gov and the rest of the Administration’s online programs will put citizens first. Our initial new media efforts will center around three priorities:

Communication — Americans are eager for information about the state of the economy, national security and a host of other issues. This site will feature timely and in-depth content meant to keep everyone up-to-date and educated. Check out the briefing room, keep tabs on the blog (RSS feed) and take a moment to sign up for e-mail updates from the President and his administration so you can be sure to know about major announcements and decisions.

Transparency — President Obama has committed to making his administration the most open and transparent in history, and WhiteHouse.gov will play a major role in delivering on that promise. The President’s executive orders and proclamations will be published for everyone to review, and that’s just the beginning of our efforts to provide a window for all Americans into the business of the government. You can also learn about some of the senior leadership in the new administration and about the President’s policy priorities.

Participation — President Obama started his career as a community organizer on the South Side of Chicago, where he saw firsthand what people can do when they come together for a common cause. Citizen participation will be a priority for the Administration, and the internet will play an important role in that. One significant addition to WhiteHouse.gov reflects a campaign promise from the President: we will publish all non-emergency legislation to the website for five days, and allow the public to review and comment before the President signs it.

We’d also like to hear from you — what sort of things would you find valuable from WhiteHouse.gov? If you have an idea, use this form to let us know. Like the transition website and the campaign’s before that, this online community will continue to be a work in progress as we develop new features and content for you. So thanks in advance for your patience and for your feedback.