The JP Morgan and Connector Group Showcase, “a unique forum for companies to introduce their leading-edge products and services to the Silicon Valley’s elite group of tastemakers and influencers ,” took place on Monday, January 30 at the JP Morgan offices here in SF. 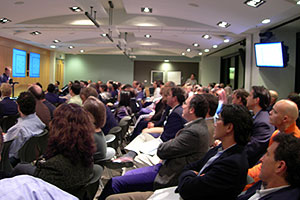 The event offered a behind-the-scenes look into some of the innovative new products currently in development in terms of consumer electronics and online services. The Showcase was organized by Auren Hoffman and Patrick Flanders, co-founders of the Connector Group.

A cocktail reception preceded the presentations, with a chance to view various product displays by presenting companies. Each company then gave a quick, 5 minute presentation with visuals displayed on four large screens.

My Ideacodes partner, Max Kiesler, has a podcast of the presentations available.

Google (Google Maps and Google Earth)
Google showed some exciting features from Google Earth, including real-time route mapping (Ireland’s DART train map and planes landing at SFO). The 3D layer of Google Earth is amazing. Mac users aren’t left out anymore since Google Earth for Mac launched on January 10. You can see more samples of mapping applications and mashups in my eHub category for geotracking and mapping.

Meebo
Meebo is a free web-based IM service. I first listed Meebo in eHub on September 20, 2005 and then had a chance to chat with Seth Sternberg a couple of months later. Meebo now has a global community and 340,000 logins daily, with the majority of that user base built with no direct advertising and only viral marketing – by bloggers and friends telling friends.

MobiTV
Live television for your mobile phone. Has a wide selection of channels and phone types that are compatible. If I watched TV, I would probably get into it.

Pay By Touch
Free service that “allows you to pay for purchases simply by placing your finger on a Pay By Touch sensor.” The concept is compelling, but it conjures images from the movie, Gattaca, where identity theft takes on new meaning when it’s tied to your finger.

Peerflix
Sign up and trade DVDs with other Peerflix users for $.99

Findaway World (makers of Playaway)
Playaway is a self-playing digital audio book. Packaged to look like a mini-book with cover art and a spine, it comes with simple ear plugs plays digital sound from the lightweight player that has eight buttons for controls. No web connectivity is needed. It’s a self-contained digital audio book – no iPod needed.

Roku
For those of you like me who love streaming web radio, Roku makes SoundBridge Radio, a wi-fi music system that plays thousands of internet radio stations wireless from your Mac or PC library. It also connects to your stereo or powered speakers.

Sling Media
Slingbox is a piece of hardware (small enough to take with you) that allows you to watch your own TV programming from wherever you are by turning any web-connected computer into your personal TV. They debuted their SlingPlayer Mac during the Macworld Expo on January 10.

Cocoa Designs
Cocoa nuts and artisan chocolate – what more is there to say? Delicious.

Trade unlimited movies, music and video games at gatorpond.com (an alternative to peerflix).  For more info, visit site or email me.  GatorPond.com for monthly rate, and gatorpond.biz for annual rate… referred by Dale Smithey when you sign-up.

The recent Connector/JPM gig held this week was a reminder of why we all work so hard in this business. There was vision, there was energy and the buzz was truly palpable. For those of us who’ve been around for awhile in the Valley, it was a bit of dejavu to a time in the early 90’s when the sky was blue, possibilities were limitless and grey matter was in abundance. As Noah Wintroub admonished us, we have a responsibility and an obligation to carry forward as influencers and bring these kinds of technologies (and ok, cocoa too!) into the forefront. Now where did I put my playaway?……