I’m at MashupCamp, a two day event at the Computer History Museum in Mountain View, CA, nestled in Silicon Valley, south of Palo Alto and north of Sunnyvale. I mention that because there’s a palatable sense of tech here in the Bay area that can’t be ignored. It’s one of the reasons that I moved to SF a year and a half ago, and it’s one of the many things I love about this area. I’ve walked into plenty of suburban Hilton Garden Inns around the country, but at this one, there’s a pamphlet for the Intel Museum in the rack of tourist attractions. 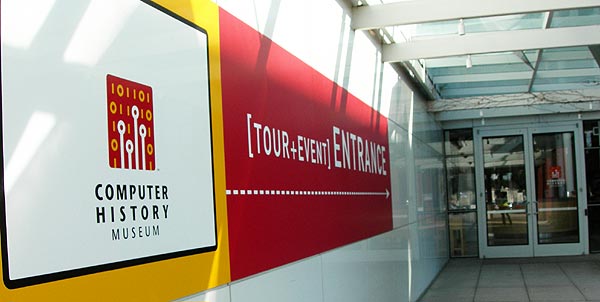 It’s great to be here. I missed FooCamp and BarCamp so I’m extra pleased to be at MashupCamp – the “only event where mashup developers get to rub shoulders with API providers, mashup enablers .” I wasn’t able to catch the morning sessions, but Dan Farber does an excellent job filling in the highlights in his post, “Around the MashupCamp fire.”

I arrived in the afternoon and saw several hundred mashers milling about. I was in time to hear Lawrence Lessig speak about Creative Commons in one of the sessions. I strongly believe in Lessig’s point of view, his causes and his work (Creative Commons, which I use on all my digital work, EFF and the Free Culture movement).

I recorded some audio but I didn’t have time to test out this new recorder so apologies in advance for the sound of typing and fuzziness.

Notes from the talk
– Mashups aren’t inherently new but the tools are new so you can engage in expressive remix.
– Seeking to have work “rationally regulated by copyright law”
– Have to craft hacks (creative commons) so people can remix due to current copyright laws.
– Fair use is a theoretical right.
– Enforcing freedoms can be costly.

On Creative Commons:
– Launched Dec 2002
– law of fair use <<– cc doesn’t try to modify it
– like GPL <<– many creators and collaborators
– CC makes tools to lower the barrier and encourage collaboration; CC is a hack to encourage creativity and an environment in which people can share without crossing the insane lines of current copyright law.

There are 7 million items in flickr with CC licenses.
Port these licenses internationally (3 layers are translated, ported) 27? countries doing it now.

Questions and discussion:
There are two cases being prosecuted now in the Netherlands where people have used noncommercial work for commercial use.

Non-commercial definition: being defined now via surveys. Advertising is split and breeds different groups. Adding a qualification for advertising.

CCmixter: part of the Wired CD release of open source music by well known musicians. Added their work into Mixter. Originally developed for audio. GPL. A CMS for remixing. Two artists were signed by record labels based on their remixes.

Current tension in understanding digital use:
– not binary
– there are gradations for licensing, reuse, fair use, copyright isn’t simple.

Lessig: “it’s the use of all rights reserved placed on digital material that is the problem.”

Free culture movement – the ability to build on top of culture. One of the issues during the P2P debate is that file sharing was not a natural concept for most people to understand (people saw it as stealing other people’s music) but explaining remixing (in the context of your youth culture, anime remixes, dj culture) is understood and people are “naturally” behind that view, or at least they get it.

Cultural differences in perception:
Europeans are interested in “moral rights” – the right to control the disparagement of creative or “my” art and work.

Questions from the room on definitions:
– terms of use is a contract
– copyright is not a contract, it’s a property right.
– in the law, copyright infringement is what is prosecutable.

IDEA: create a nonprofit to perform research or catalog how people are using digital material (eg. documentary film makers example). It makes it easier for others to follow a set of criteria or behaviors.

1. begin to catalog what’s possible
2. begin to push on the legal side for changes to copyright law.

Side topic:
CC developing for JPEGs for licensing. They’ve done licenses for embedded objects (mp3) and can include a validating URI to increase the confidence around digital objects.

Before 1978, copyright was on opt-in system. Now it’s implied. many people register their work so they are subject to statutory damages. Filtering works that need benefit of copyright and those that don’t. These days there is no ability to create an archive of work (like archive.org) because of copyright law since 1978.

What can we do?
Lessig: become more active in demanding rights and changes in copyright law.

Mashup developers (and I would add, any digital creator)
1. live with the law and have a good faith belief that what you’re doing is fair use.
2. if you want to live in a world where you can remix work, you should allow the same for your own work… expressing it and attaching it as a social contract.

The other session I observed centered around online file storage APIs and included a number of apps in eHub. Box.net, Prodigem, Gmail, CNET, Veritas, Omnidrive, and SmartCast were present. Gary Lerhaupt from Prodigem showed Auto RSS Torrent, his mashup for publishing torrents using Prodigem’s API. Gary showed an example of using Auto RSS Torrent on the delicious popular video RSS feed. Simply upload content using either the ajax widget, form field, or by web URL. Auto RSS torrent will look at the feed at regular intervals, check it for updates and then torrent to the web. For more on Prodigem, see eHub Interviews Prodigem. For more on Box.net, see my post about E27.

Peter Hirshberg of the Computer History Museum gave an entertaining presentation at the end of the day. I’m sure someone shot video of the presentation and if so, I’ll add a link, but for now, you can listen to the audio below.

Looking forward to Day 2 tomorrow! Also, if you missed this MashupCamp, there’s already a signup for MashupCamp 2.