Mike Arrington’s TechCrunch 5 party for Shel Israel and Robert Scoble’s new book, Naked Conversations, was a big success on Friday night in Atherton, CA. Some 400 people showed up at Mike’s house to mingle, hang out, congratulate Shel and Robert, and generally celebrate amidst a great crowd of techies, bloggers, entrepreneurs, tech giants, thought leaders, startups, designers, developers, photographers, and even Douglas Engelbart, the creator of the mouse.

Max and I had a great time seeing friends and familiar faces (Mike Arrington, Dion Hinchliffe and partner, Kate Allen, Chris Smoak, Deb Schultz, Mary Hodder, Auren Hoffman, Mike Sigal, Kevin Werbach). I enjoyed meeting Richard Lusk and Oliver Starr of Foldera and some of the people behind my favorite sites (Susan Mernit, John Furrier of Podtech), people whose sites are in my referrers (Gabe Rivera of tech.memeorandum, Brian Oberkirch of Like It Matters), people I’ve been emailing with for the last few months (Stowe Boyd, Chris Messina) and of course, people from apps in eHub (Michael Tanne from Wink, Justin from Standpoint, Shadows, Pete Flint from Trulia, Box.net, Zazzle). 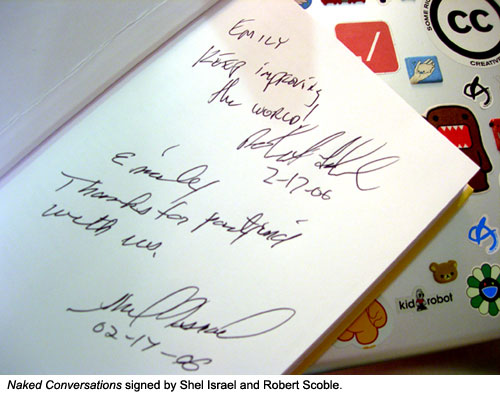 There’s already over 500 photos of the party on Flickr. Thanks to Mike and everyone else who made this party possible! Look forward to TechCrunch6 :)

Here’s a video I shot with my digital camera:
36 seconds in the tent at TechCrunch 5