An Urban Emoticon that Measures the Happiness of Cities

This is emoji writ large. The Fühl-o-meter/Public Face is an interactive art installation that calibrates the mood of the city in which it has been erected with a monumental illuminated Smiley. The work of artists Richard Wilhelmer, Julius von Bismarck, and Benjamin Maus, the urban emoticon accurately communicates its host city’s gefühlszustand according to “mood data” obtained using integrated software which […] 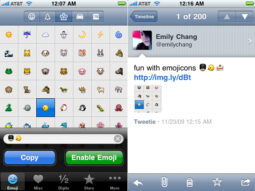 “Icon Keyboard” is a free Emoji keyboard/icon app available in iTunes. You copy and paste the icons from the app into your text messages or tweets.